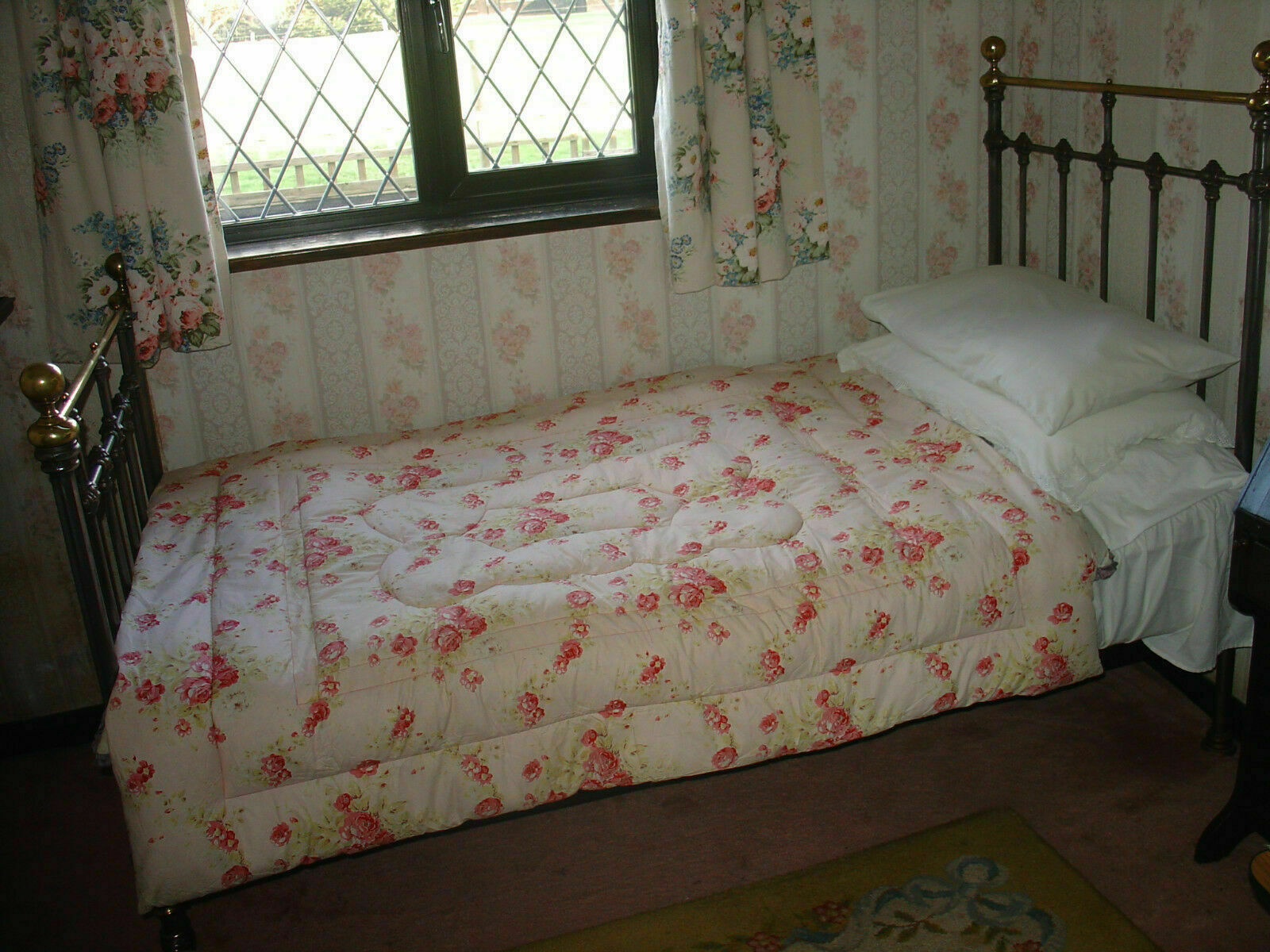 This product has been viewed 0 times, since it was first published 6 days ago. An average of less than once a day is visited. ATTENTION! There is only 1 unit, Hurry and don't let it slip away!

Antique Victorian Brass and cast iron single bedstead made by Hoskins & SewellGenuine Victorian single bedstead, made from thick grey cast iron and brass.  It has been left the original grey colour, however it can be easily painted white, cream or black which is common colours  for these beds.Very heavy and well made.  There are some hallmarks on the bottom part of the brass on the front leg (photo 7) which shows the maker Hoskins & Sewell, I have given some information about the manufacture below:Please note regarding condition. As the bed is over 120 years old it does have some dents from wear.  On the very top of the brass knobs of the headboard they each have, one, but as its right at the top of the knob, it doesn't show. (photo 10)  one is on the brass part under the left brass knob on the footboard (photo 10)  one on the left bottom part of brass part where the engraving is (photo 12).  but other than that is in decent condition for its age.Comes complete with original antique cast iron steel and mess spring mattress base, which is in good condtion.Please find below the measurements.Below is the Head and footboard measurementsHeight taken from the very highest top of brass knobs headboard to the very bottom foot of the bed: 53.5inches/136cm approx.Height taken from the very highest top of brass knobs on footboard to the very bottom foot of the bed 43.5inches/110cm approx.Width for both of head and footboard is:36inches/92cmLength total taken from head to footboard is:77inches/196cm approx.Height taken from floor to top of spring base part that the mattress would sit on:14.5inches/37cm approx.A standard 3 foot mattress fits well on the spring base.

In the 19th Century Birmingham was the largest manufacturer of bedsteads in the world. And one of the most renowned firms producing beds in Birmingham at that time was Hoskins and Sewell who were founded in Bordesley in 1850.

During the Victorian period metal beds became hugely popular. First being used in hospitals and then later in domestic settings; metal bedsteads were seen as a way of improving hygiene in the home due to the cleanliness of metal over wood. An advertisement in Harpers Magazine of the period states “Cleanliness, cheerfulness and beauty are the reasons why metal is supplanting wood in bedsteads. Physicians endorse metallic beds for sanitary reasons, and the fact is well known that whatever adds to the beauty and cheerfulness of the bedchamber conduces to health and sound repose.”

Interestingly the firm was acquired by Neville Chamberlain in 1897. From 1897 to 1916 Neville established himself as a leading figure in the industrial life of Birmingham. In 1915 he became lord mayor of Birmingham and in 1937 Prime Minister of the United Kingdom.

By the late 19th Century Hoskins and Sewell had stores in London and New York. The New York store located on Fifteenth Street (adjoining Tiffany’s) had over 10,000 beds in stock. An advertisement in New York for Hoskins and Sewell beds in 1897 purports to have “new and special designs embodying exclusive style, high finish and fine workmanship.” Materials listed include brass, steel-bronze, nickel and enamel with some very fancy designs. Their expansion into the US market continued with a store opening in Chicago.

At the beginning of the 20th Century Hoskins and Sewell capitalised upon the booming ocean liner market, producing brass beds that were guaranteed not to corrode when in contact with sea air or sea water. They achieved this through a special finish they applied to brass beds, which they called the “Varnoid” process. A publication called The Shipbuilder in 1911 stated that Hoskins and Sewell were known for their Varnoid process. The Varnoid process was a treatment to brass beds which gave them a lustre, similar to lacquer but unique in the way it afforded brass protection against sea air and sea water, allowing the beds to be used on ships. In fact Hoskins and Sewell supplied the beds and cots to the Titanic. It is not known what the actual Varnoid process was, but it certainly worked. Brass beds found in the wreckage of the Titanic years later were barely corroded after many years underwater!

By the 1920s the company was still supplying the domestic market with brass beds from their London showroom on Oxford Street and via agents around the country. These beds were more formal in design, the extravagant high Victorian designs with tubular enamelled frames making way for solid all brass beds with square rails of a much simpler design. By the mid-20th Century Hoskins and Sewell became known for making hospital beds, supplying hospitals all over the world. In an advertisement from the 1960s they are listed as making and supplying beds as far afield as Kenya, Uganda and Zanizbar. In 1961 Hoskins and Sewell were listed as employing more than 300 people.

Pick up from either Hackney  E5 or Essex SS17 orDelivery may be possible  for a extra cost, depending where you are,  and also in line with lockdown rules, so please email first to check before bidding.Please feel free to ask any questions you may have.NO RETURNS ACCEPTED